The answer for VFR pilots is, well, no you’re not required to check your VOR receiver. That doesn’t mean that it’s not a good idea.

And for IFR pilots, how often do the Federal Aviation Regulations say you must check your receiver when using it for instrument flying?

According to FAR 91.171, you may not conduct an IFR flight using VORs for navigation unless your VOR system has been checked within the preceding 30 days and found to be in limits. The check must also be logged in the aircraft records.

Fortunately, these are checks that pilots can accomplish on their own, and in many different ways.

The FAA allows pilots a handful of different methods for checking VOR receivers. There’s an easy acronym to remember about these tests, including tolerances – do you know it?

The acronym most taught to IFR students is VODGA. This stands for VOT, Ownship, Dual, Ground, Air. Let’s take a closer look at the steps to check your VOR receiver using this acronym.

The VOR Test Facility (VOT) is the most accurate and is the preference to check your VOR receiver. Not all airports have a VOT. You can discover which airports do have a test facility in Section 4 of the FAA Chart Supplement (formerly known as the Airport Facility Directory [AFD]). The supplement indicates which airports have the test equipment, which frequency to use, and any other notes specific to that location.

Steps to using the VOT:

In the absence of a VOT, you may use other checkpoints designated in the Supplement. These are the ownship tests, and they may be conducted in the air or on the ground.

Checking your VOR receiver may be done at either a designated location on certain airfields or over specific geographic locations while airborne. These locations, frequencies, and notations may also be found in Section 4 of the FAA Chart Supplement. The Supplement will provide the name of the VOR and/or airport facility, the frequency, and whether or not it is a ground or airborne checkpoint. If it’s an airborne checkpoint, minimum altitudes will also normally be listed. If it’s a ground checkpoint, the location on the airfield to perform the test will be listed.

Ground checks are preferred over air checks because it’s easier to position your aircraft to a more precise location on the ground.

You may also make your own airborne check by looking at the charts and picking a significant geographic landmark under a VOR airway. Fly over the landmark and note the azimuth that your aircraft VOR receiver indicates. It should be within 6 degrees of the annotated airway azimuth.

The FAA allows for one more method of checking a VOR receiver, and you may do this if you have two separate receivers in your aircraft (they can share an antenna).

A dual receiver check is valid if you have two separate receiver units in your aircraft. They can have a common antenna but the actual receivers must be separate. These checks can be done on the ground or airborne.

The final pieces of the VODGA acronym, GA, is to remind you that there are different tolerances for ground checks and air checks. It should make sense that ground checks are more accurate, and thus have a lower tolerance for error. All tolerances are 4 degrees, including a dual check in the air. The only exception is the ownship airborne check, which has a tolerance of 6 degrees.

This may be the most neglected part of the VOR checks, and if the check is not logged you are in violation of the FARs. Doing the actual checks is important! But so is logging them.

Logging the check is easy. It doesn’t even have to be in official aircraft maintenance logs, it just needs to be with the aircraft and available for inspection. A simple spreadsheet will suffice.

The log must contain the date, location, bearing error, and signature of the pilot conducting the check.

Summing Up the VOR Receiver Check

If you’re an IFR pilot using VORs for navigation, you must check your VOR receiver within 30 days preceding an IFR flight, and log the check.

You may check two receivers against each other if your aircraft has two separate units. This will be the easiest if you have two units. Tolerance is 4 degrees.

You can also check your receiver while on the ground at certain airports using a dedicated VOR test facility or a designated VOR ground checkpoint, both found in the FAA Chart Supplement. Tolerance is 4 degrees.

In the absence of any other way to check your VOR, you may conduct a check airborne. The tolerance is 6 degrees.

The checks must be logged with the date, location, bearing error, and signature.

These regulations are found in FAR 91.171. More information can be found in AIM 1-1-4. But most importantly, don’t forget to keep current with these checks, and log them. 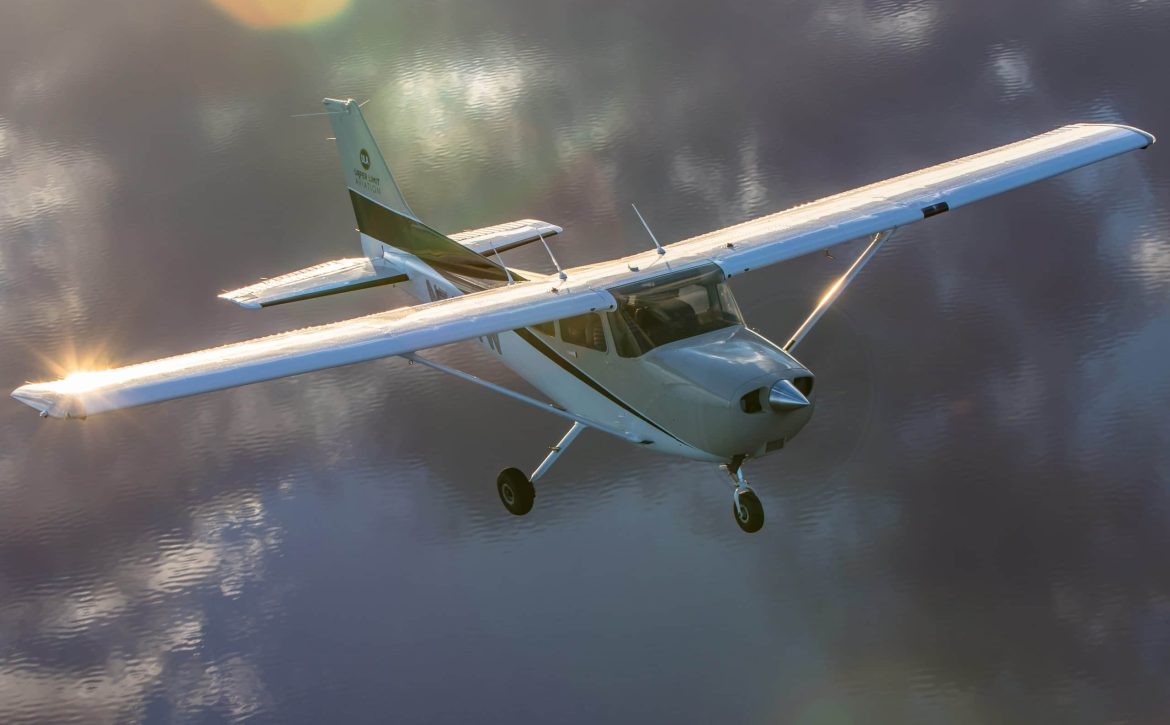 VORs: Avoiding Confusion with the TO / FROM Flag

If there’s one area of the Instrument Flying Course where most students struggle, it’s usually on the subject of VORs. For some reason, VORs are very mysterious, and for some reason many students have no motivation to learn them thanks to the capabilities of GPS!

VORs are still important to learn – not just because they’re on the FAA test – but also because there will be one time where you’re in Instrument Meteorological Conditions and your GPS receiver fails for whatever reason, and you’ll be left to navigate with your VOR. Don’t think it’ll happen? It’s happened to me!

One of the more difficult concepts to understand is that confusing TO/FROM indicator. Many of the modern Horizontal Situation Indicators (HSIs) remove this somewhat ambiguous indication, but the older indicators can leave many pilots confused.

Makeup of the VOR Instrument

To understand that pesky TO/FROM indicator, it’s important to first understand how a VOR ground station works and how it interacts with your cockpit instrument.

Your location around a VOR station is referred to as a radial. If you look at a bicycle wheel, the center of the wheel is the ground station and the spokes are the radials emitting from the ground station. They’re labeled like the numbers on a compass. The radial pointing north is the 360 radial, the one pointing east is the 090 radial, and so on, all the way around for 360 radials.

The instrument that displays all of this information is most commonly called the Course Deviation Indicator, or CDI. The Omni-Bearing Selector (OBS) knob lets you select one of these spokes (radials), and the CDI will tell you where you are in relation to your selected radial.

But the way this information is displayed is where the confusion comes in.

As you rotate the OBS knob, the needle in the instrument will move. You can think of the center of the instrument as your aircraft, and the needle is the selected radial. So it’ll show you if you’re left or right of the radial you have selected…sometimes.

Then the TO/FROM flag will show you if the course you have selected will take you towards or from the station.

In “reverse sensing,” the instrument is displaying exactly what you’re telling it to display. It takes some effort from the pilot to not become “reversed.”

Where pilots get confused and think that the instrument is reversed is when the OBS is set to the reciprocal of the course they want to fly. If the needle is left of center, turning left will actually push the needle away from you rather than centering it – because you’re already left of course, not right. This can sometimes make already confusing situations worse when pilots are multitasking.

To avoid this situation, always have the OBS set to the course you want to fly, not necessarily the radial you want to be on. The TO/FROM flag will tell you if this course is taking you TO or FROM the VOR. For example, if you want to fly south on the 360 radial (you’re north of the station), set the OBS to 180 and the flag will show TO – because you’re going to the station on a course of 180. Now the deflection of the needle left or right will spatially make sense to you.

We’ve seen that the CDI can tell you two things: if you’re left or right of the selected radial, and if you’re going to or from the station.

To determine which radial you’re on, once you’ve tuned the proper VOR, center the CDI with a FROM flag. Because remember, these radials emit from the station! Now read the number at the top of the compass rose, under the arrow. This is the radial you are on.

If you were to fly that heading, it will take you further from the station. Flying the reciprocal would take you to the station.

If you were to center the CDI with a TO flag, the selected course would tell you which course to fly to go towards the station, but not which radial you’re on.

Some instructors will discuss how to determine your position relative to VORs just by looking at the CDI and not rotating the knob. This works on the ground at zero knots, and you’ll need to do it for the test, but it’s much simpler in flight to just center that needle with a FROM flag and read the radial you’re on.

To do this for the test, draw the compass rose with four quadrants. Look at the course selected on the OBS and draw a little airplane in each quadrant flying that heading (aircraft heading has nothing to do with the CDI indication, but this helps visualize the aircraft’s course). If the TO/FROM flag is showing TO, “X” out the two airplanes pointing away from the VOR, and vice versa. Now look at the needle – is it left or right? That’s the side of your aircraft that the VOR is on.

In summary, always remember these things:

-Aircraft heading has nothing to do with what is displayed on the CDI. You can fly circles over a point on the ground all day and the display won’t change.

-Set the course you want to fly, not necessarily the radial you want to track, to avoid reverse sensing.

-Center the CDI with a FROM flag to determine the radial you are on.

There are many simulators available to practice this. I like the app Radionav Sim. It allows you to rotate the OBS, move the VOR station around, move the airplane around, and animate the flight path to show how the display would change as you move around the VOR. Use this app occasionally to refresh yourself on the operation of VORs.