When Did You Know You Wanted To Be a Pilot?

My personal aviation lineage and the first time I knew I wanted to be a pilot trace back to my grandfather.

Those of us who have been fortunate to have received the gift of flight or just the enjoyment of aviation can usually trace back to where that flame to be a pilot was first kindled. Perhaps it was a friend who owned an aircraft and gave you your first flight. Or it may have been a family member who long ago instilled that love and passion for airborne experiences. That is how it was born in me – through my maternal grandfather.

The Start of His Influence

My grandfather was born in Rochester, New York in 1907, a mere four years after the Wright Brothers’ flight in 1903. He and my grandmother moved to California by the mid-1950s where they lived the rest of their lives. I was only 8 – 10 years old at the time and remember vividly him taking me to either the local airport to watch planes take off and land or to a hole-in-the-wall photo gallery where he would purchase pictures of anything aviation. Being just a kid at the time, I did not understand the significance of those weekly trips – to me it was just ‘time with grandpa.’ My bedroom would be adorned with pictures of the Spirit of St. Louis, or from early aircraft designed by aviation royalty such as Douglas, Curtiss, Langley or the Wrights.

My grandfather, circa 1927-28, with a WACO aircraft he’d just helped build.

As years went on and life unfolded before me, I was unknowingly aware that the kindling aviation fire was simmering within. By the time I was a junior in high school, that kindling of a desire to be a pilot had grown to a full-blown blaze (which it remains to this day). I enrolled in the school’s fledgling 2-year old USAF Junior ROTC program, whose curriculum included not only the mandatory Drill and Ceremony protocols but frequent aviation-related field trips. One of those trips was to one of the two local active duty U.S. Air Force Bases in southern California – March AFB (now March ARB), where I stood in awe as the Strategic Air Command (SAC) B-52 Stratofortress fleet based there would lumber down the runway in a very deceiving manner that looked as if it was not moving enough to even take off!

By early September 1975, his physical state was in serious decline. After surviving six heart attacks, he suffered a stroke that paralyzed the left side of his body which left him not only unable to speak but only able to walk with the aid of a walker. I had been accepted into the University of Southern California as a biology major and he and my grandmother followed my parents and I as we drove the Los Angeles freeway system to my new life as a college freshman living in the dorms. That was the last time I saw him alive, for two weeks later he passed away- at the young age of 68. Little did I realize at the time, but from that day forward he would become greater than life to me as aviation slowly but surely took a hold of my career.

Carrying On And Working To Be a Pilot

Four the next four and half years, my total focus was concentrating on ‘surviving’ the college experience. By the end of 1979, I had not only changed my major but was able to graduate with a Bachelor’s of Arts degree in Psychology. By November 1980, I was able to land my first ‘real’ job as a Civil Engineering Aide with the County of Orange, CA. This turned out to be my personal gateway that would lead me back to aviation, because the County owned and operated John Wayne / Orange County Airport (SNA), and provided me with an avenue to someday working there. In January 1984 I began flying lessons at SNA. By February 11th of that year, I was ready to solo. I took the time to commemorate the occasion by penning a tribute to my grandfather entitled “You Gave Me My Wings.” I earned my private pilot certificate on April 11, 1984. I was living in a small condominium nearby and took stock that night to offer a toast to grandpa – “We are on our way” I stated to myself that night.

My grandfather in the mid-1960s, at a Southern California airport.

On June 17, 1987, I was selected as a Noise Abatement Specialist at John Wayne Airport and performed those duties until May 1994, when I received a promotion as a Noise Officer at Phoenix Sky Harbor International Airport (PHX) in Arizona. For the next 27 years, I became an airport administrator at four commercial service airports and airport manager at four general aviation airports (while also teaching aviation education to undergraduate and graduate students at Embry-Riddle Aeronautical University-Worldwide Campus, where I earned two Masters Degrees). All through those years, however, I did not forget where that passion for flight came from. At every airport, I would make it my duty (of which my superiors were glad to see) to conduct self-inspection tours – not only to satisfy associated FAR Part 139 Certification and Safety requirements – but to spend time with my grandfather as we drove the perimeter road to make sure all was well, and to reflect on him. When I saw a vintage airplane I would stop the vehicle and gaze at it…” Imagine” I would tell myself, grandpa saw or heard about these planes when they were in their prime.

January 22, 2016. My youngest son Andrew graduates Western Maricopa Education Center (WestMec) at Glendale Municipal Airport (GEU) with his Airframe & Powerplant Certificate. Now I know many of you may be thinking “Oh, that’s nice he took his father’s advice and followed in his footsteps.” Well, not exactly. He decided on his own that he was going to ‘give it a try’ because in his mind he was out of options of what he wanted to do in his life…yes, dad was proud of his achievement. He now works at one of the busiest flight schools in the U.S. at the second busiest general aviation airport in the country (and one I used to manage), Phoenix Deer Valley Airport (DVT). Another generation of aviation in the Arena family… one that started long ago and who’s tradition continues. Thanks Grandpa!

You can get started today on your journey to be a pilot by filling out our online application. If you would like more information, you can call us at (844) 435-9338, or click here to start a live chat with us.

Areas of StudyEntertainment
April 16, 2016by admin

When Is a Private Pilot Ready to Fly With Family and Friends?

Dr. Mary Ann O’Grady Prior to making the decision to take family and friends flying, a...
Read More 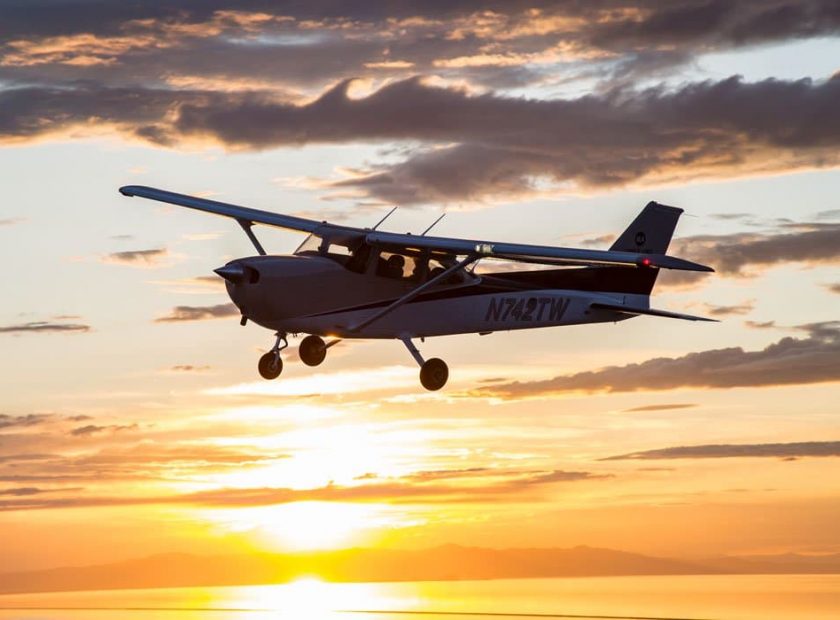 Upper Limit is excited to spread the word that AOPA has over 100 scholarships available...
Learn to Fly!